Stellar Emperor and Beyond!

Stellar Emperor Alpha testing. Builds may have a short period of working operation. Gameplay operations may change drastically from day to day. Feel free to join in the testing.
Locked
4 posts • Page 1 of 1

Just a few notes for the upcoming Alpha War 4 starting June 28th at 9:30 PM EDT:
Once again, I remind all players to report any oddities or errors they find, I am doing my best to clean them up as quickly as possible (and while adding as few new ones as possible).

Please help spread the word, I look forward to seeing you all next war!

What have you done with my planet??

Notice the range on there?
Or how about the estimated time...

I had this happen like 3 times in a row, but each time once I clicked on the options on the left, it would completely disappear 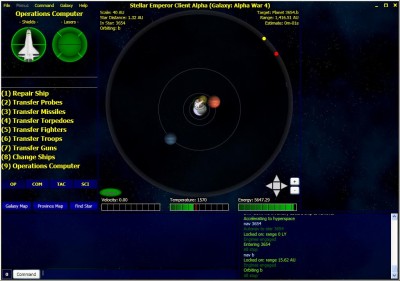 Yeah, that won't effect gameplay, it is just a display issue.

Previously I was drawing the screen every time I sent ship status, but I stopped sending ship status when it was not needed. When you orbit a planet, you lose your x/y coordinate (-1,-1) therefore it thinks your far away unless it knows to calculate you are on the planet locally.

I have added an extra draw call when your client receives a navigation target update, which should resolve this issue, it will be in the next release.
--Cossid AKA Caleb
Top

yeah I knew it wasn't much of an issue, just figured I would point it out since it was noticed, now if only I had final pm'ed all my planets... it appears I missed one, ugh